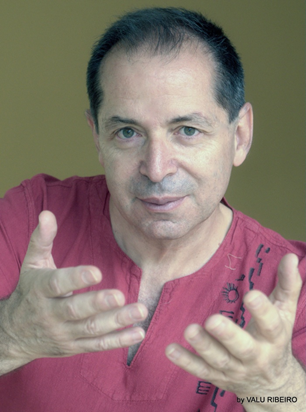 Christos began dancing the moment he could stand on his own two feet.
His passion was first channelled into performance and teaching at ‘Moving Into Dance’ where Sylvia Glasser, together with the dancers, developed the ‘Afro-Fusion’ dance style. Afro-fusion integrates traditional African dance with contemporary techniques.  What began as a form of resistance to the strict separation of cultures under Apartheid has now become the signature of South African dance.

In 2001 Christos found Biodanza and was immediately astounded at the potential and power with which lives were transformed by dance.

In 2005 Christos began his international travels necessary to expand his skills in Biodanza; says Christos ‘I was privileged to train for my Didactic diploma under Rolando Toro himself’. His approach since, has been of continued exploration and research and training in some powerful extensions of Biodanza including; Minotaur; Aqua Biodanza and Neo-Shamanism.

Christos is currently researching the role of dance in developing metaskills in leadership training.  He observes that as much as there are cultural differences between people, there are also universal principles and practices that are common to us all – dance is fundamental – based on neuropsychology that arises out of the evolution and development of humanity.  A clear understanding of these principles enables him to add depth to the Biodanza vivencia that creates profound shifts and changes for the dancers.